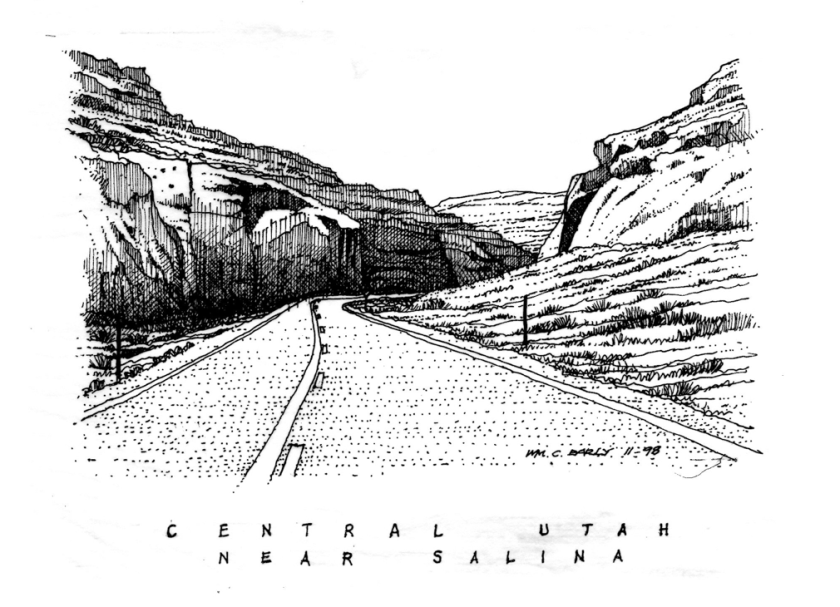 Another night behind another Holiday Inn, this time in the super-cool, elevated air of Ely, Nevada. All I had to look forward to the next day was driving 300-plus miles across the Silver State on what had been officially designated as “The Loneliest Highway in America”…U.S. 50. It was up and down, up and down, across the only state with that unique geological phenomenon known as cordillera (a system of parallel mountain ranges). All of a sudden I realized that all of the mountain ranges in the western hemisphere ran north and south (the Andes, Appalachians, and Rockies), whereas in the other half of the world, the major ranges (the Himalayas, Pyrenees, and Alps) all were oriented east to west. Hu-uum, I wondered why.

I stopped in Eureka (designated “The Loneliest Town on the Loneliest Highway”). I noticed a lady icing down a 6-pack of Coors in the back of a pickup. The form-fitting short-sleeve shirt and jeans showed she was well-preserved from the neck down, but the crow’s feet and brown, parched skin belied her age. I was guessing she spent a lot of time on horseback. I just had to ask her, “Ma’am, what do people do here in the loneliest town?” She had a nice smile and a friendly reply: “Well, we have a ranch just outside of town. There’s minin’ here, too. We do okay, here. It’s not as dead as it looks.” Eureka! There’s still silver in them, thar hills.

I eased through Austin (the geographical center of the state), which was obviously another mining town because of its high, mountain-side elevation. Where do they get their water? I always forget to ask. I guess the several boarded-up store fronts contradict the fact the town’s doing okay. The burg’s one gas station must be very prosperous, charging $1.65 a gallon. Highway robbery! From the outskirts of town, I could see U.S. 50 below, as the thin ribbon of pavement stretched to infinity, dead-ending at another range of the cordillera…an unlimited panorama.

Again, I was confronted with the unrelenting celestial rays from ol’ sol in mid-afternoon, without a shelter of shade in sight. Then, out of nowhere it seemed, three giant willows appeared on the horizon…was it a mirage? It was no apparition of my imagination…it was the tangible town of Cold Springs, another Baghdad Cafe with one gas pump. I dove under the precious arboreal shade, as if to plant a stake on a claim of hallowed ground. To add to my good fortune, an 18-wheeler was dieseling only a few yards from the shaded area. I figured he (or she) was snoozing in the behind-the-cab, airconditioned bedroom. As I strolled towards the sun-bleached timbered structure, all I could notice were the Nevada plates plastered on the front facade. Hey, could there be a treasure trove inside? I had just acquired an embossed Nevada plate from my Albuquerque friend, Michael Wiener, who has a warehouse of plates. Once inside the rustic building, my imagination became a reality… the walls were adorned with antique artifacts of auto registrations. Actually, 99% of them were repititous of my collection, except for one – a blue-on-orange Oregon plate. Pointing to it, I asked the magpie lady/proprietor if it was for sale. “Nope, not that one, or any of ’em,” she replied in a friendly manner. I continued with, “I’ll bet this is your own personal collection, am I right?” She nodded with a smile. “Well, I know exactly how you feel, ma’am. I have a collection of my own, and I’m three shy of having all forty-eight.” As I was purchasing a sack of ice, she gave me some words of encouragement, “You hang in there, sonny. You’ll get ’em all.”

After about three hours under the cottonwoods (yes, I mistakenly called them willows), I managed to time it where I was sliding down towards Reno Casino with the sun just a fading orange glow behind the last range of mountains. I pulled off at Sparks to catch a couple of hours of the classics cruisin’ the main drag. I had to pick out a favorite, as usual, and this time it was a 1948 Lincoln 4-door Continental, resplendent in canary yellow. One finally reaches a saturation point, panning nostalgia-on-wheels, so around midnight, I retreated to the vast, overnight parking grounds at the Hilton Hotel/Casino off of U.S. 395. Goodnight, Reno.

I ascended I-80 to Truckee, where I made a bee-line to the Safeway, just to see if those luscious California peaches were still available (remembering our visit two years ago). What a disappointment…they were small and hard as rocks. I dallied around the shopping areas, picking up supplies, and just generally enjoying the delightful atmosphere …a temperature of about 80 under cobalt blue skies. I engaged in talk with a codger who’s 1976 Chevy van was a sight to behold, “loaded for bear from bow to stern”. What caught my eye though were the two bicycles tied down on the top.. “You know, they’ve come out with a rear tire shuttle, a rack on the back for bikes,” I said, then added, “I just installed one on my van over there. I’m really happy with it.” “Thanks for the tip,” he said, “but I have a system for getting them down and back up.” We talked about cubes, carbs, and trannys, and parted agreeing that nothing could beat a Chevy power train.

I finally made it to the “House on Donner Lake”, where only Bill Botkin was there to greet me. He gladly told me we had two whole days to ourselves before the maddening crowd arrived. He immediately took advantage of the respite by graciously offering me a tour of the area in his 1962 Cadillac convertible (with the top down, of course). And what a grand tour it was, ascending old U.S. 40 up to a development. called Scenic Lake (primarily a winter habitat), then back down to a scenic overlook at Rainbow Bridge, where we could see Donner Lake below. Wow, what an incredible panorama of evergreens as far as the eye could see, and the snow-capped Sierras on the far horizon. What made it all the more amazing was that old, winding two-lane U.S. 140 we had been negotiating was at one time the main artery between San Francisco and Reno. What a wondrous drive people missed now in these speed-crazed times. I-80 does afford a few elevated glimpses of Donner Lake, but who has the time to really see. Well, I thanked Bill for a memorable afternoon. Heck, he enjoyed the drive as much, if not more, than I did, especially when he dropped that magnificent machine down into low gear on the downgrades, and reveled in hearing that unforgettable rumble and popping of the dual glass-pack mufflers. We were forty years younger for a blissful hour or two – anything wrong with that?

Bill’s forte has always been cooking, and the next morning he outdid himself again. Besides spicy scrambled eggs, he rustled up some extraordinary hash browns. During breakfast, I suddenly remembered to ask, “Have you heard from Blaine?” “Oh, I almost forgot. He called late last night from Salt Lake City. The battery went dead on him,” Bill recalled. “Seems like the guy can’t make a trip without something going wrong,” I lamented. Bill nodded in agreement … Blaine was definitely snakebit.

I had the place to myself for the rest of the day, since Bill took off for Reno to visit his brother Merrill. There was no question as to what my agenda was – it was bike time – an opportunity to explore and discover on the old velocipede. As I was biking around, gawking at all the unique houses in the neighborhood (of course, not two were alike), I was recalling a Donner Lake aphorism: “Just another day in paradise.” Eventually, I ended up about a mile down the old highway at the marina, which besides having a boat landing, had a series of projecting wooden decks, specifically molded for the piscine aficionados. I knew immediately that was going to be my haven for the rest of the stay. And so it was, every available afternoon, I would literally “pack up” the bike for the sojourn to the lakeside “wharfs”. And did I ever utilize those baskets on the back – a thermos of ice water; an old bowling ball bag replete with “Hawaiian Tropic” sun block for the cheeks and nose, a sack of unshelled peanuts, a plastic container full of grapes, and reading material; and a Botkin-on-loan folding chair strapped on top of all that. I was “loaded for bear.” But it was the fisher people I anticipated meeting that really polarized me to those rendezvous. Although I did have some fishing gear with me, I was reluctant to cast a line since I was derelict in obtaining a fishing license, and understandably so. I was quick to discover the annual fee was $27.00, but just a one day permit was an exorbitant $15.00. Well, what the heck, I was having a grand time observing everything…the postcard scenery (which included the grinding freights pulling and pushing towards Donner Pass), the boating activity (which included those insipid jet skiers), and foremost, the people around me on the deck. I mean, I felt like I was part of the gatherings. One day, as I was lounging there reading, what else, but Rodger Kahn’s “The Boys of Summer”, a whole passel of people suddenly materialized, unfolding chairs, opening tackle boxes, baiting lines, passing beer around, and in general, setting up camp for the afternoon. After awhile, a gentleman from the “family” approached me and said, “Now, you look like a man who’s really enjoying himself. I like the title of that book. What’s it about?” “The Brooklyn Dodgers of the 1950’s,” I replied. He somewhat apologetically said, “Hope we’re not disturbing you.” I just smiled up at him and said, “Not at all. I’m thoroughly enjoying this whole scene, believe me. Have some peanuts?” He gratefully accepted a handful.