“In an unprecedented display of evil, immorality, and lawlessness, the American left’s resistance to Trump has shown no limits.  And this is what makes it so dangerous.” https://www.americanthinker.com/articles/2018/07/all_hands_on_deck_for_operation_midterms.html

How to help in midterms? https://www.gop.com/get-involved/

@“The beginning of the end of the Democratic Party…I remind you that a shift of 25% was all that was predicted needed to keep the Dimwits from every winning another election.

I’ll argue that Trump’s election has become even more important than Reagan’s and any other President since FDR. America was in a bad way under Carter. Reagan gave us the end of the Cold War and 20 years of unbridled prosperity. I’d say Trump repaired more severe damage from Obama than Reagan did
from Carter. Carter’s damage was economic shambles, disastrous foreign
policy and general ineptitude. Obama was all of that coupled with a
radical hatred for America, abuse of power, criminal corruption, and
constitutional crisis after constitutional crises. Yes, Obama was far
worse and did more damage to America than Carter.

What Trump is doing for America, her economy, her foreign policy, her military, and her citizenry is unprecedented in it’s impact, measure and rapidity. We’ve never seen such a massive turnaround, so impactful and so quickly on American life. You’d have to rank them as Washington, Lincoln, FDR, Reagan and Trump as far as President’s of such historical importance. No President since Roosevelt has so effected American life at a daily level and Whether you like Roosevelt or not, no one can deny his impact. It is the same with Trump. And it’s only the beginning, folks. Can you imagine what this man can do for America when we give him 6-1/2 more years and more conservative Republicans to do it with? A Supreme Court secure against radical leftism for a generation? An opportunity to grow America again with a booming +5% GDP economy and level trade deals around the world? The $4 trillionf offshore investment dollars that have already flowed back into our country and the trillions more in waiting once the trade deals are done? America used to dominate the world trade market. Everyone owed us money. We were the creditor nation, not a debtor nation. Trump could actually do what he said, when he said the debt would start coming down rapidly. He thinks big and there are a lot of moving pieces to his puzzle, but he understands finance perhaps better than anyone whose ever occupied the Oval Office. God Bless America and God Bless President Trump!”

“Rev. Ira Acree, one of the organizers of Thursday’s protest, said residents are tired of the “tale of two cities,” where one area is thriving and others are crippled by poverty and gang violence.

And finally, in the most shocking twist in today’s divided nation, it is interesting to see Democratic leaders in Chicago calling for President Trump to involve the National Guard.

State Rep. La Shawn Ford, a Democrat who represents the West Side of Chicago, called on President Trump to help the city.

“Not everyone believes Chicago is a Trump-free zone. If he’s serious about helping the people … I accept his help. We can’t turn any help away,” said Ford, adding that seniors and children need to have safe streets and federal authorities need to help the local police.  “

MSMs are coordinated & intentional in destroying this country. Just Say No. The old news outlets are not needed.

“Trump continued his attacks against the “fake news” media despite critics in the media demanding that he change his rhetoric.

“I am providing a great service by explaining this to the American People,” Trump wrote. “They purposely cause great division & distrust. They can also cause War! They are very dangerous & sick!”

“Dianne Feinstein and her 3rd husband Richard Blum whom she married in 1980 made MILLIONS off of their financial interests in China.

Richard Blum made millions of dollars off of his Chinese investments–his investments in China flourished after his wife, Dianne Feinstein became a US Senator in 1992.”

Was Feinstein’s undercover Chinese spy driver involved with these deaths?

“China killed or imprisoned 18 to 20 CIA sources from 2010 to 2012, hobbling U.S. spying operations in a massive intelligence breach whose origin has not been identified, the New York Times reported on Saturday.”
https://www.thegatewaypundit.com/2018/08/revealed-china-murdered-or-imprisoned-20-cia-operatives-and-sources-while-feinstein-had-a-chinese-spy-as-office-manager/

Correction. Lowe not just a driver but an advisor. 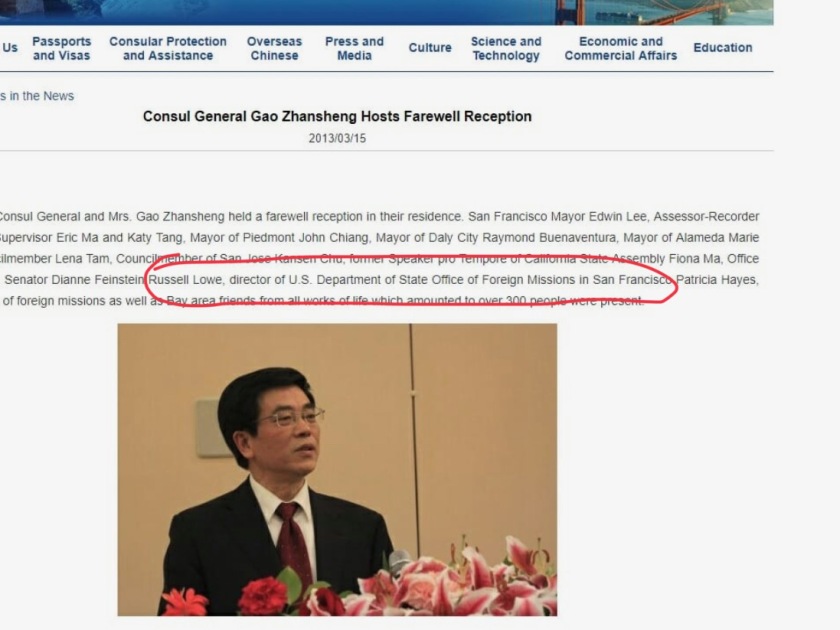