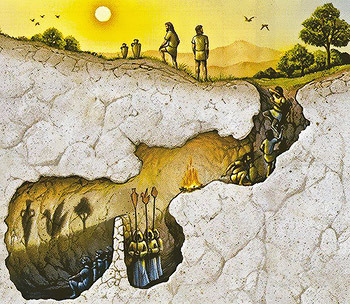 Of all the life forms on earth, only man is considered a rational animal. This rationality can be expressed in both the natural and spiritual realm. The natural realm is accessed by ones reason. The spiritual realm is accessed by man’s intellect and soul. These two paths of understanding aid each other because they both have the same source of Truth. In this paper, by looking at two completely different events, the Resurrection and Jihadism, it can be shown that philosophy assists theology in its mission of bringing the Good News of the Gospel to others.

It would be prudent to define philosophy and theology. One definition of philosophy found in the online Oxford dictionary is the study of the fundamental nature of knowledge, reality, and existence, especially when considered as an academic discipline.[1] Some synonyms of philosophy are metaphysics, convictions, ideas, and reason. Philosophy derives from the Greek word philosophia, which means love of wisdom. Antonyms of philosophy would be ignorance, unreasonableness, and corruption. A working definition could then be the capacity within man to look at his world and to postulate hypotheses for why things behave as they do using natural reason.

Meanings and ideas associated with philosophy assist one in understanding more fully the term used. Some ideas often employed are principles, way of thinking, and sound judgment. Point of view is another associated term but it lacks precision in thought and is prone to a relativistic interpretation. This paper will concentrate on the more objective definition of philosophy- right reason.

Additionally, considering some major contributors to the field of philosophy can orient our understanding. Plato’s articulation of Forms brought to the development of philosophy the concept of a distinct, completely separate Form. Neo-Platonists would extend the idea of Form to the One which would have the ultimate degree of perfection. Among Aristotle’s many contributions to metaphysics, his vision of a hylomorphic or embodied soul kept philosophy rooted in a realistic interpretation. This view enabled one to view man as a rational animal. Thomas Aquinas merged the understanding of Aristotelian philosophy with the authentic truths of the Faith. He laid the “crown of theology” on the head of philosophy- elevating philosophy without violating reason’s own standards of investigation. At this point, it would be helpful to consider another aspect of which man is capable of studying, theology.

Theology is defined as the field of study and analysis that treats of God and God’s attributes and relations to the universe; study of divine things or religious truths; divinity.[2] The word derives from the Greek word theos meaning god and logos the study of. Some synonyms of theology are divinity, branch of knowledge, revelation, and tenets. Antonyms would include disbelief, agnosticism, and atheism. A useable definition of theology could then be the study of things pertaining to a divine being.

Associated terms and ideas to theology would include sects, profession, and creed. These terms imply differences in belief systems. Christianity, whose founder is Jesus Christ, would be one profession in theology, while followers of Mohammed would be a considered a different sect. Believers who hold different doctrines would exhibit different attitudes regarding behavior, which often times can be traced back to modes of rational thinking.

With the definitions of philosophy and theology given and their associated terms explored a key distinction needs to be made between the two. Philosophy uses only the natural sciences in its study of man’s understanding of himself. Theology, though at ease with natural inquiry, admits the use of revelation as a source of truth about God and man, while philosophy does not. John Paul II in his encyclical Fides et Ratio offers salient insights into the connection of faith and reason.

On the twentieth anniversary of his pontificate, October 15, 1998, John Paul II promulgated the encyclical Fides et Ratio. In this document, John Paul II discusses philosophy and theology and the interconnectedness of the two. He highlights the essential role philosophy plays in man’s understanding of himself. He also notes the limitations it has and the methods to avoid errors.

John Paul II had a high regard for philosophy and listed four positive contributions metaphysics offered the human race. First, he believed that the more people understood reality the greater they would see their uniqueness both from lower life forms such as irrational animals as well as their uniqueness to other people. Philosophy played a special role in this understanding by allowing each culture to understand truth more deeply. A second important result from metaphysics is the construction of society’s legal system. A third benefit of philosophy to man is the scientists’ confident attitude that there is an order in the natural realm and it can be discovered. A fourth benefit of philosophical thought, according to the Holy Father, is that philosophy is often the only grounds for dialogue with those who do not share our Faith.

However, the pontiff also cautioned that philosophy has its limitations, as history can too often attest. In an often quoted remark, “Reason without faith leads to totalitarian systems, … and Faith without reason leads to superstition.”[3] John Paul points out that a rational system of thought will always be deficient in some manner and it is the Magisterium’s solemn responsibility to call to attention serious errors being espoused. This discernment is meant to allow for a more accurate means of inquiry rather than a muzzling of intellectual pursuit.