The Church is in uncharted waters. Time to face it squarely.

“We have a pope who has not only been accused of covering up for the perpetrators of the ghastliest of sexual crimes, both before and during his pontificate, and of filling his council of closest curial advisers with similarly corrupt men, but of more heretical utterances and doctrinal errors than was previously believed possible under the charism of papal infallibility – which, despite the horrors of sexual abuse, is actually the greater crime.”

“The Catholics who care about the Church are angry, but mostly powerless. They can try to withhold money, but they know the Church has long since found a better endowed teat from which to suck – that of national governments willing to pay them exorbitant sums for things like “refugee resettlement.” https://onepeterfive.com/the-big-ugly/

A noble sentiment but way off the mark. Power not piety is the end game. “Pope Francis, please act like Peter. If you are guilty of removing sanctions placed upon McCarrick by Pope Benedict, step down. This would be the holy and noble thing to do,” writes Kalchik.” https://www.lifesitenews.com/news/pope-francis-please-act-like-peter-writes-priest-and-sex-abuse-victim-who-b

How about refuting Viganò, opening the sources, figuring out how King Maker McCarrick got to his position? Is that what you want with the prayers, honesty? Very few people take you seriously anymore?

“Finally, a source in Rome confessed: “I’m shocked. This is the most Catholic statement that’s comes out of the Vatican during this pontificate. Pope Francis is calling us to look to Leo XIII. This is likely the first time in his pontificate that he’s mentioned a pre-Vatican II pope.”

A lesser known fact about Leo XIII is that, in addition to composing the prayer to St. Michael the Archangel, he also wrote an exorcism prayer against Satan’s attacks on the Chair of Peter.”

“why should Francis be judged so differently from other men? Apparently, because he stands on an entirely different plane of being. Father Spadaro presents him as a sort of unmoved mover:

The Pope draws energy from conflict and sees that his actions upset them as a sign. The driving force of the pontificate of #PopeFrancis manifests itself precisely in the paroxysm of the backlash that it generates and that is thrown at him, crossing over him without moving him.

And Bishop Gustavo Carrara, whom Francis recently appointed auxiliary bishop of Buenos Aires, speaks directly of the pope as a divine manifestation:

I believe, this is a great moment: God’s spirit is embodying itself in Francis’s spirit, but not many comprehend this dimension.

Such statements are appalling. “

Symbolism will be their downfall.

“For the opening Mass of the Synod, this is what Francis carried, rather than a crosier or a ferula.” October 4

“ACIPRENSA has a story in Spanish about the meaning of the stick thing that Francis had the other day.

It might look just like a “stang” used in satanic rituals, but it was gift from young people intended to be ” Jesus crucified with arms joined by a nail and sculpted in the shape of a bamboo.”  And, “In the torn heart of Jesus on the cross is guarded a small seed, that seed that dies to bear fruit and our hope. And it reveals the secret to make life flourish, love, “said the young woman explaining the meaning of the staff.”

So, when you see it now, repeat to yourself… no, the vestments in Ireland did not have an interlocking trio of sixes… no, the stick thing is not a stang.  It isn’t.  It isn’t. October 5, 2018 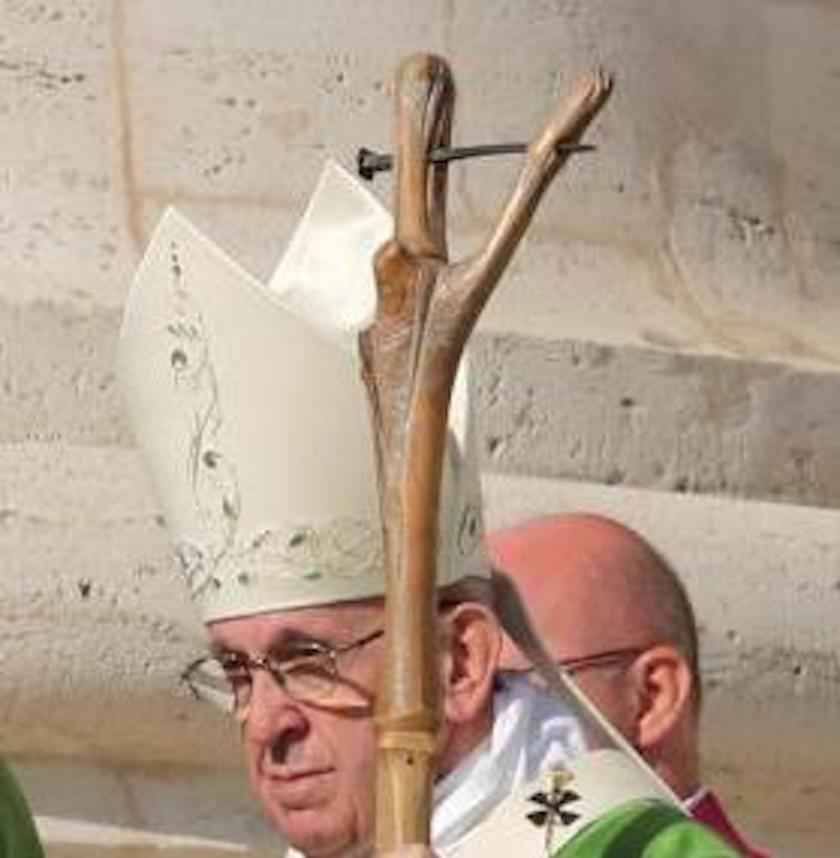